Welcome to Techinspect a division of Aegis Safety Pty Ltd 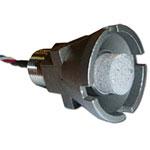 The catalytic bead sensor consist of two coils of fine platinum wire each embedded in a bead of alumina, connected electrically in a Wheatstone bridge circuit.

Ampcontrol's Methane Analyser has been custom designed to monitor the concentration of methane being fed to engine modules installed in power stations supplied by Landfill Waste Gas, Coal Seam Methane or Biogas. 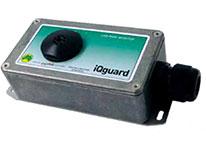 The iQguard gas detectors are affordable, solid and robust devices designed for monitoring the level of toxic gases found in enclosed carpark and loading dock environments.

The catalytic bead sensor consist of two coils of fine platinum wire each embedded in a bead of alumina, connected electrically in a Wheatstone bridge circuit. One of the pellistors is impregnated with a special catalyst which promotes oxidation whilst the other is treated to inhibit oxidation. Current is passed through the coils so that they reach a temperature at which oxidation of a gas readily occurs at the catalysed bead (500-550°C). Passing combustible gas raises the temperature further which increases the resistance of the platinum coil in the catalysed bead, leading to an imbalance of the bridge. This output change is linear, for most gases, up to and beyond 100% LEL, response time is a few seconds to detect alarm levels (around 20% LEL), at least 12% oxygen by volume is needed for the oxidation. [source]

Infrared point sensors are active measurement systems, in that they typically measure the absorption of a gas by passing it through a laser-illuminated chamber and measuring the change in transmitted signal. Infrared imaging sensors include both active and passive systems. For active sensing, IR imaging sensors typically scan a laser across the field of view of a scene and look for backscattered light at the absorption line wavelength of a specific target gas. Passive IR imaging sensors, on the other hand, measure spectral changes at each pixel in an image and look for specific spectral signatures which indicate the presence of target gases. The types of compounds which can be imaged are the same as those which can be detected with infrared point detectors. [source]

Electrochemical gas detectors work by allowing gases to diffuse through a porous membrane to an electrode where it is either oxidized or reduced. The amount of current produced is determined by how much of the gas is oxidized at the electrode. The sensor is then able to determine the concentration of the gas. Manufactures can customize electrochemical gas detectors by changing the porous barrier to allow for the detection of a certain gas concentration range. Also, since the diffusion barrier is a physical/mechanical barrier, the detector tends to be more stable and reliable over the sensor's duration and thus requires less maintenance than other types of detectors.

However, the sensors themselves are subject to corrosive elements or chemical contamination, and may last only 1–2 years before a replacement is required. Electrochemical gas detectors are used in a wide variety of environments such as refineries, gas turbines, chemical plants, underground gas storage facilities, and more. [source]